Feature: Why LGBTQI communities will be disproportionately affected by the climate crisis

In a world-first, UK based charity GiveOut has launched the Lesbian, Gay, Bisexual, Transgender, Queer and Intersex (LGBTQI) Climate Fund, supporting activists from around the world to further their work in combating the impact of the climate crisis on their communities.

The initiative, which launched in March 2021, facilitates donations to various international causes via a single fund distributed through GiveOut.

Recipients are largely grassroots foundations who otherwise would not have access to mainstream donors, they are allocated grants of up to £5,000 to develop their campaigns, primarily in areas of climate justice and LGBTQI advocacy.

Since its inception in 2018, GiveOut has raised over £650,000 in new funding, and currently supports over 30 organisations across five continents.

Rupert Abbott, executive director of GiveOut, said: ‘We established the LGBTQI Climate Fund to provide an opportunity for individuals and businesses to support groundbreaking work at the intersection of LGBTQI rights and climate change, ensuring that LGBTQI activists have more of the resources they need to support their communities in the face of the climate crisis.

‘The pandemic has shown on a global scale that LGBTQI people are disproportionately affected in crisis situations. But this may prove to be a dress rehearsal for the greatest challenge of our time: the climate emergency. We project that LGBTQI communities will be among the most vulnerable to the direct impacts of climate change-related natural disasters and to longer-term consequences – including service disruption, forced displacement and even conflict.

‘This will be the case, especially for LGBTQI people in countries that are most threatened by climate change, and where their identities are also illegal or repressed.’ 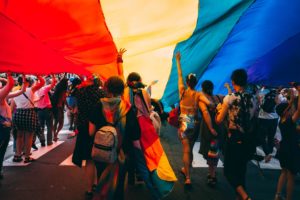 The effect of the pandemic, on both individuals and the organisations that are offering crucial support to communities, has been catastrophic.

According to a survey conducted by Consortium, a membership organisation for LGBTQI groups, 47% of organisations reported an immediate loss of earnings in the pandemic, with 20% saying they were concerned they would have to close.

These strains come at a time when individuals are particularly isolated and in need of help. A 2018 study by the LGBT Foundation found that 30% of cis LGB people and 46% of trans people in the UK had considered suicide in the past year, compared to 1 in 20 amongst the general population.

These inequalities, ingrained from years of oppression and social isolation, are only set to worsen as the impacts of climate change become more prevalent.

Displacement due to climate shock will particularly affect those who are already marginalised, in the UK, 24% of homeless youth (aged 16- 25) identify as LGBTQI. 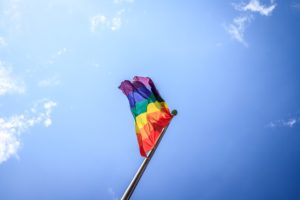 Rupert Abbot added: ‘So far, we are supporting three groups under the fund. In Jamaica, J-FLAG is undertaking ground-breaking research to understand how their community is affected by and engaging with the climate crisis, building an evidence base about the scale and immediacy of this threat.

‘In Southeast Asia, the Equal Asia Foundation is empowering LGBTQI activists to engage with governments, humanitarian organisations and climate movements within their countries and broaden the conversation around climate change, ensuring that their communities are not left behind.

‘And in the Kingdom of Tonga, the Tonga Leitis Association is training those in charge of emergency shelters to accommodate LGBTQI people and campaigning for the inclusion of their community in future consultations on climate change measures.’

The Fund is already supporting pioneering research alongside activism, enabling a new understanding of the potential impact that the climate crisis will have on minority groups.

Many studies point to the exceptional impact the LGBTQI community has had across a huge spectrum of social justice and political campaigns, and there is also a clear intersection between LGBTQI identities and environmental stewardship.

In a recent interview, Lee Dibben, supporter engagement officer at GiveOut, said: ‘It is so exciting to speak to activists who are entering new spaces and using their personal identities as a political intervention.

‘We are seeing an upsurge of calls that we need to recognise the impact of the climate crisis on women, on people with disabilities, on people of different economic statuses… This is an intervention that will allow us to strengthen our movement, and ally with other groups who are being left out of the conversation.

‘We have been engaged in our struggle for rights for over half a century, and I’m sure we’ve got a lot of valuable learnings to give.’

To learn more about GiveOut and the projects they support, go to https://giveout.org/